Apologies for the lack of updates lately, i've been alot busier than usual so haven't had the time nor energy to keep everything up to date.

But since the latest issue Arcadia arrived in the post today (a bit late but better late than never), i'd thought i would continue with the monthly quick look at Arcadia. 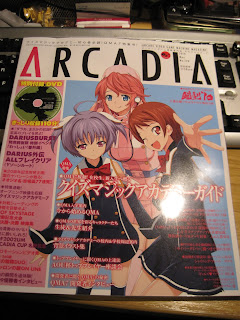 The main feature this month is for a game called 'Quiz Magical Academy', and comes with a free dvd. (I'll write about this a bit later.) 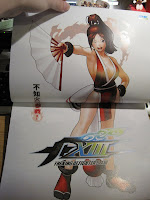 But anyway in terms of KOF content, as soon as you open the magazine there is a two page spread of Mai Shiranui with a message saying something along the lines of 'Shiranui Mai Joins The Fight'.
Also it gives a fairly vague arcade release date of Summer.

Though this issue does have a small section about KOFXIII, alot of the information you would likely know already or has been made available on the internet for a couple of weeks now. 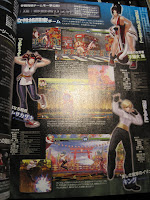 The bulk of this section is made up of character profiles, some of the new system changes, and a short prologue. (All of which you can also find on the official website.)
There are a few interesting bits though. For example there are small discussion boxes regarding the missing members of teams.Whilst discussing who might be the missing member of Iori's team, one person replies jokingly with 'It's Miss X'. 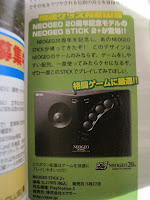 Also mentioned is the release of the Neo Geo stick 2+ for PS3, not owning the first stick yet i'm not sure what (if anything) they have changed to this version.

I may well be wrong, but i don't seem to remember a PS Home button on the first stick so maybe that's new?

There's also a small feature on KOF Skystage, Metal Slug XX for psp, and a new Metal Slug Team Mission for Japanese mobile phones.
Other bits and pieces in the magazine include Tekken 6 Global Championship Tournament, Tekken the movie, and there is a section regarding this year's Tougeki with some details about each game. 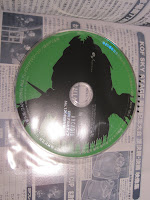 Last but not least, as i mentioned this magazine comes with a free DVD, not knowing what this was before i ordered i just considered it a freebie.
Upon watching it however it turns out this is actually packed full of goodness.

Videos on this DVD include matches from the 2002UM Arcadia Cup, some videos from the KOF SkyStage event, a video (which i can't read the title of) showing 77 clips from Neo Geo games (mostly bugs/glitches), interviews with the winners of Tougeki 09, an all clear video of Darius Gaiden and various promotional clips for different games.

I think the DVD for this issue makes up for the lack of KOFXIII information, hopefully next issue will have more on KOFXIII.

For this issue you can buy it on Playasia for about £11.10, or you can also subscribe via Playasia to get the next issue for slightly cheaper here.
Posted by King Of Fighters [UK] at 14:08