Almost coming to the end of the Old SNK Goods From Japan blog entries now, i think i only have two more things to take photos and write up about now. Though i guess once i finish i'll probably start to do write ups on things i already owned but neglected to write up about in the past.

This one is gonna be a pretty short write up, not too much to say about these things that you can't get from the photos.

First up a KOF98 badge, still sealed, is actually fairly large for a badge at approximately 5CM. I think my friend picked this up from a car boot sale for 100Y, which was not as impressive as previous things he's managed to find for 100Y (like the Dengeki CD Bunko). 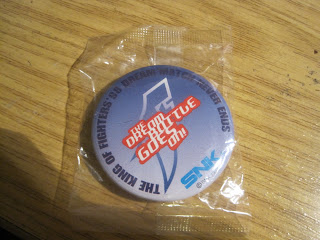 Next up are some KOF97 flags i asked my friend to bid on in Yahoo Auctions, actually after i received them i kinda wondered why i wanted them in the first place...I think i was a bit caught up in the excitement of being able to use Yahoo Auction lol.

I vaguely remember them costing about Y900 or around that price, so they were pretty expensive in comparison to some of the other things i had brought back for me.

As you can see from the photos below the ones i got were the Womens Team, Shingo, and New Face Team. 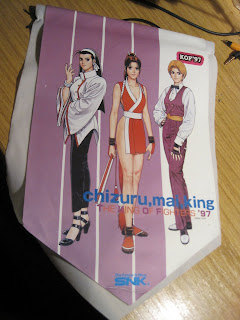 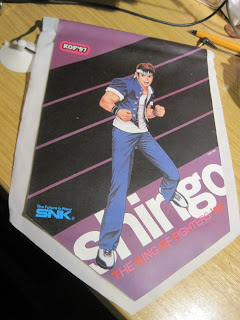 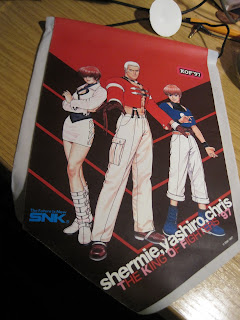 It would've been quite nice to have gotten a full set of every team from 97, though i haven't seen any more of these on Yahoo Auctions since i won this set...

You can just about see in the pics, these come attached to a piece of black string with a suction cup on it so you can probably hang it on your window.

And that's about it for this entry for the next one more than likely i do it on the KOF96 Characters Mook.
Posted by King Of Fighters [UK] at 00:17