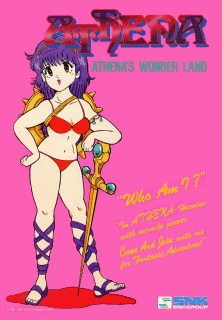 As i mentioned in one of the previous posts i ended up buying the SNK Classic Athena for the PSP Minis service, and thought i'd share my initial impressions of it.

I've not actually had any experience of playing the arcade/famicom versions before so i was quite interested in picking this game up and at US$2.99 it seemed like too good of a price to pass up.

Interestingly it seems SNKP have outsourced this port to the company G1M2.

Upon turning on the game you're presented by a loading screen using the original artwork from the game, and then the game itself which features a border using the same artwork.

One thing i didnt realise the first few times i played the game is if you press the select button it brings up an options menu where you can save/load state, and change various other options like turning off the borders if you prefer full screen.

The game itself is hard as nails, the enemies come at you thick and fast and i've not even made it anywhere near to the end of the first level yet...Given the difficulty it's still a pretty fun game, i've only just discovered that you can find parts to her armour which i think make Athena receive less damage.

A good thing about SNKP releasing this as a PSP Mini is that it's playable on both the PSP and PS3, making it incredibly good value at $2.99.

So far very positive opinion of this new set of SNK Classics as PSP Minis and i hope that they continue to release some of the other SNK Classic games (like StreetSmart).

I've made a video showing a little of the gameplay and options menus and embedded it below.