A new start to another series of Old SNK Goods from Japan, the first item to be shown will be this box of Gamest Collection SNK Trading Cards.

This was something i wasn't really expecting to be brought back so was pretty exciting to receive them, that plus the fact that they were all still sealed and i recently mentioned a website featuring trading cards made it all the more sweet. 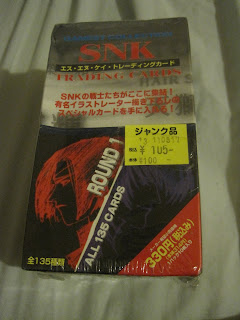 Funnily enough although probably quite exciting to us Western KOF/SNK fans this was picked up by my friend for Y105 for a sealed box of 15 packets of cards (10 cards per packet), and is labelled as 'Junk Goods'. In regards to this i think the Japanese are pretty crazy to consider this as 'junk'...


One thing about this though is it makes me more excited about going 'treasure hunting' when i head out to Japan later on in the year as i've been told you can find all kinds of great stuff that the Japanese no longer care about for really cheap. 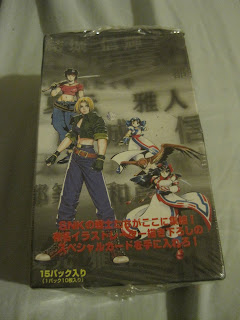 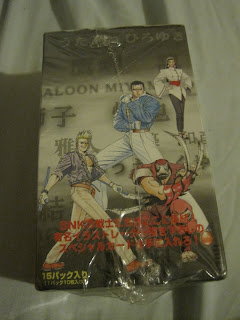 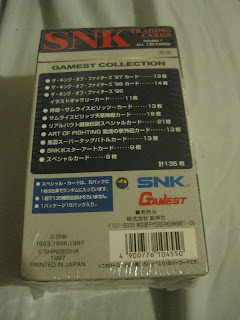 Anyway as you can see within this collection of cards there are several titles represented such as KOF, RB Special, Samsho, AoF3 and Kizuna Encounter.

The cards themselves mainly feature stock art, so if you've seen galleries for each of the games then there is probably not much new here you wouldn't have seen before (though it is still quite nice to own them in card form).

There are also 'special' cards within this set, i only managed to get a shiny Robert Garcia card, apparently each 5 packs is supposed to contain 1 special but within 15 packs i only got 2. (And they were both a shiny Robert =_= ...)

I think the image shown on the top of the box (see image below) is supposed to be the super special card of the series. 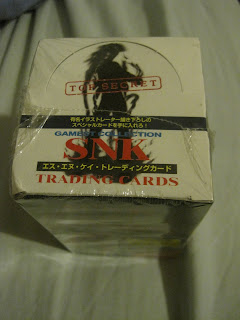 Judging by the games featured and the dates on the box i would guess that these were originally released some time in 1997 and originally retailed for Y330 per pack.

There appears to be 135 cards in the set, but even after opening 15 packets i didn't manage to get a full set :(

Hopefully at some point i'll be able to find some more of these to finish the set, although i do personally prefer the SD style trading cards that you can some times see on Yahoo Auction.