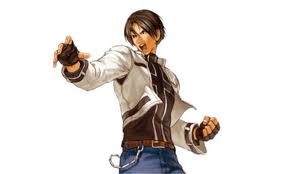 Overall he felt a little bit 'floaty' compared to the original XIII Kyo, not sure if this is 100% true or if I was just going crazy on caffeine.

From what I could test his HD Bypass combo (cr.B, cr.A -> qcf+BC) double kick would not work, I've discovered for some reason doing the HD bypass with some characters creates additional delay frames not present normally.This might have just been me being off though, so I will test again when he is released.

Unfortunately I didn't get a chance to test out any other HD Bypass combos.

Overall I felt I preferred the original XIII Kyo, though I will probably end up buying NESTS Kyo tomorrow anyway.
Posted by King Of Fighters [UK] at 19:12 No comments: 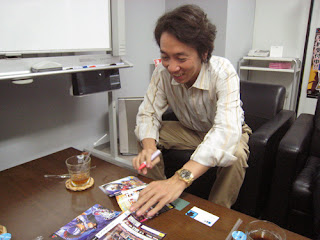 Earlier today I found out that 1UP.com has recently interviewed Takashi Nishiyama.

Whilst the article/interview is titled 'The Man Who Created Street Fighter' as you find out in the interview he also was a big part in the development of quite a few of the major SNK fighting game titles, and personally I consider him as one of the 'Fathers of 2D fighting games'.

You can check out the full interview over on 1UP, it's actually pretty rare for him to give an interview so well worth checking out. I know from my own experience it's even difficult to find much information about him searching through Google.

It's interesting that he notes that Fatal Fury was his Street Fighter II, how different that series might have been if he had not left Capcom to work for SNK.
Posted by King Of Fighters [UK] at 19:17 No comments: 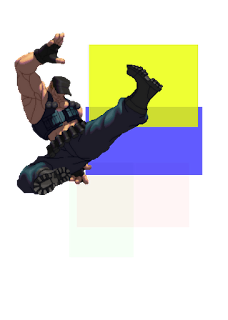 Saw this via DreamCancel's forums.

A few of the members over on Shoryuken.com have put together a guide wiki for KOFXIII covering much of the basic, intermediate, and advanced elements of KOFXIII.

Although I have not read the entire thing as of yet (it is fairly extensive), from what I have read it is very good and would be helpful to all levels of players to check it out.

As it is a wiki page I'd imagine it would be updated periodically with fresh discoveries, check it out here.

Also don't forget to check out the various resources on Dreamcancel.com with the character specific subforums and also has a wiki section (not sure if this has been completely updated for console version though).

On a non related note I traded in a load of games over the weekend to put towards an iPad, first thing I had to do was put KOF-i on to it. 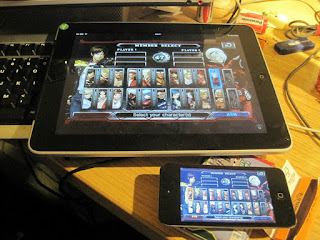 Bit difficult to play due to the size of the iPad, but because I can save replays more easily with two KOF-i games I might take the chance to come up with some combo videos when I get the chance.
Posted by King Of Fighters [UK] at 14:53 No comments:

Iori With The Power Of Flames DLC Out Now

Just saw over on Rising Star Games' Facebook page that EX Iori is now available for purchase on XBL Marketplace, not too sure if it is out on PSN today (judging from the EU PSN blog it doesn't look like it is).

Bought an instant code for 400MS from Game's website (£3.50) for free using my Game card points, so I've set it all up so i can download the DLC when I get home tonight. 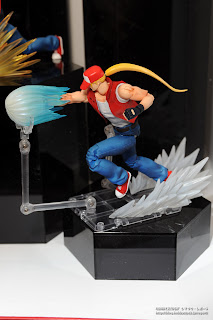 Also it seem that there will be a poseable figure of Terry Bogard coming out at some point from D-Arts, check out more pics here, not quite my favourite character but hopefully it'll pave the way for a series of poseable KOF characters.(So I can do childish stuff like the image below.) 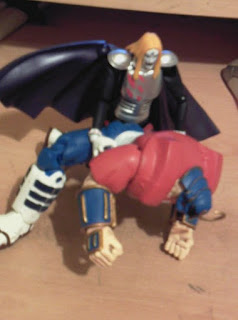 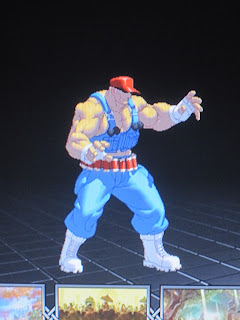 During the stream for SouthTown Arcade's ranking battle last night a few of the members of the chat room were speaking about creating a Duffman version of Clark.

Thinking about it, the idea was a perfect fit for Clark so after work today I decided to give it a try and came up with the above colour edit. Just a bit of a shame you can't edit a red cape on to Clark. xD 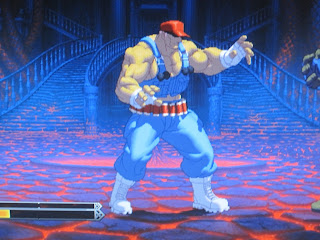