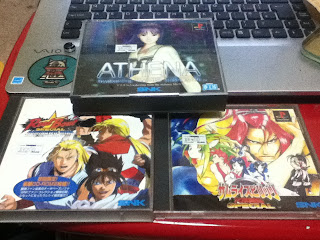 It's been a while since I've had time to write anything properly on here.

As I've mentioned life hasn't been too easy living in Japan, working part-time and trying to do as much as possible within one year on a limited budget means I don't have much time for gaming or to do as many write ups.

But tonight I'm going to write a little bit about Traders which is a used games store located in Akihabara.

Why this store in particular ? Because for me it's been a treasure trove of SNK used games for the past few months.

As you can see in the opening image, I've picked up these various PS1 titles in the past few months for the meagre amount of Y700. Equivalent to about £5 or so.

I was really happy to be able to pick up Puzzle Bobble for the NGCD for a meagre Y200!!!

Although the items are sold as 'junk', I have yet to buy anything from there which has been faulty or in poor condition. At worst there may be some wear to the case or the spine card is missing.

As well as SNK games I've also found other retro titles I was interested in for Y200 or less.

I can't remember which one it is on the map but you can have a look at the locations of Traders in Akiba on their website.

Someone likes KOFXIII a bit too much...

Saw this over on Kotaku, apparently someone in Tokyo decided to whack one off over a KOFXIII Climax machine...
Posted by King Of Fighters [UK] at 17:36 No comments: