But anyway, I started selling the Dreamcast figures on eBay but also decided to keep one for myself, because it's quite a nice figure.

A few days ago I came across the Megadrive figure in a game center in Makuhari, so decided to give it a try and after about Y1000 I managed to get one.

So of course having two out of three figures I thought I might as well buy Sega Saturn too...and... 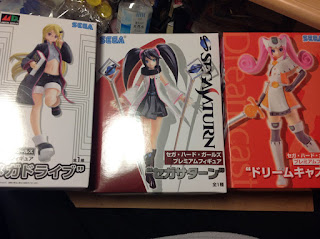 Now I have all three lol. 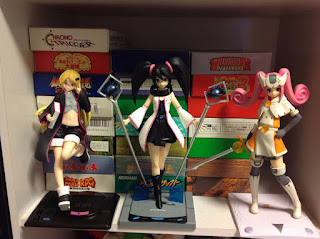 Aside from Megadrive I think they are pretty decent, I was a bit annoyed though because my Dreamcast figure has some manufacturing defects with some bit of color rubbed onto the white areas...

Would like to have the space so that I could display them on top of the actual consoles, but my apartment is a bit cluttered at the moment...

Anyway onto the anime series, I'm about halfway through watching it at the moment. It's quite funny at times with some of the SEGA game jokes, but other times it can be a bit silly (borderline stupid).

I'm not the biggest SEGA fan so I don't understand all of the references that are being made in the series, I did laugh out loud a few times though.

Well worth a watch if you have the time.

Rambled on a bit (actually kinda half asleep at the moment), but just wanted to share something I've been a bit interested in lately.

I watched some of the Nico live stream of KOFXIV recently, and thought that it's starting to look quite interesting. There's a demo event in Akihabara later in the month that I might go to if I can be bothered to go into Tokyo (not my favourtie place tbh.)

But I'll probably try and write some thoughts on KOFXIV when I get the chance.
Posted by King Of Fighters [UK] at 17:02