Finally got some free time today, so I'll write a little bit about my experience going to and watching the KOFXIV World Championships.

Originally I hadn't really had the intention to go, as up until recently I'd been busy with work but on a whim after seeing the SNK official twitter posting about it a few weeks ago I just decided to apply via e-mail.

Just a week before the event I got an e-mail confirming that they had sent out my ticket in the mail and that I should be receiving it shortly, then on the Monday I got my ticket. 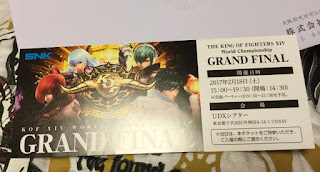 The minor touches they put on the invitations were great, in my opinion, things like the letter being signed by Antonov and having his seal on the letter showed to me that they had put some effort into making them. 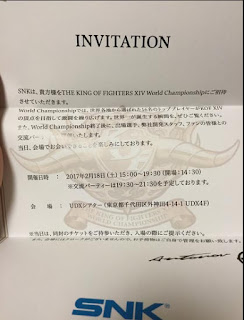 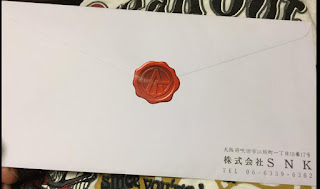 But anyway fast forward to the actual event itself, I arrived at Akihabara UDX a little after the doors opening time (2:30pm) and as I made my way up the escalators there were staff members dotted around the building to help guests find their way.

Before heading into the UDX Theater area I decided to use the toilet, as I headed towards it I saw Dakou also going to use the toilet. I thought about saying 'Hi' but didn't know whether he spoke English and I don't really like speaking with people while inside the toilet.

Upon entering they had a small lobby area set up, where you handed over your ticket to receive your 'Guest pass' 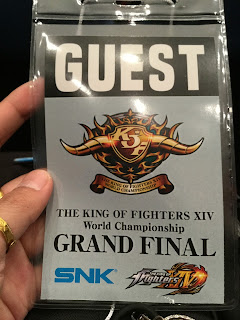 Later on I found out that there were several different coloured passes, I'm not quite sure what each of them meant specifically but the grey one was for the general public.

Entering the theater area it was a little smaller than I had imagined, if you can imagine a small cinema it was probably not much different from that. Staff members guided you to the seats, where they asked if you could fill in the space as they were available. (I originally wanted to sit at the back but was asked to move forward lol)

As the event was being prepared to start they had some KOF music playing (I can't remember specifically which tracks) and they showed some minor information on the screen. (IIRC it was things like turn off your mobile phone, blablabla) I spent most of this time using the free wi-fi to play Pokemon Go.

When the event started there were a few hiccups with getting the intro started, you could see the windows desktop showing up a couple of times but when it was all good to go we were greeted by the introduction screen with Antonov.

The MCs for the event were then introduced, Maxwell Powers(sp?) and Seira Ryu, who are the voice actors for the title screen announcer and Meitenkun. After this they introduced the 15 players who were due to play that day, with the announcement that Reynald was unable to make it due to various circumstances.

You can check out a couple of videos of the winners finals, as well as the trophy ceremony and closing ceremony on my Youtube channel.

They had a couple of breaks in between parts of the tournament for the spectators to use the toilet, or in my case running out about 5 minutes towards the station to use the smoking area.

Overall the tournament was fun to watch live, I don't tend to watch many tournaments nowadays for the full duration but I think the general atmosphere of being there made it more exciting.

As the event finished they asked members of the crowd to exit the theater, with the grey pass holders to be the ones to leave first.

Now to the one negative point that I had with the event, as we were leaving as the information regarding the after party was given in Japanese I was a little confused as to what was going on. I saw some people collecting their present bags that were being handed out at the lobby area so went over to get one.

When I went over I was asked something in Japanese, I didn't catch what the staff member said so I replied I can only speak a little Japanese. (I later figured out that she asked me whether I was going to the after party and that they were only giving out the presents to people leaving.)
She looked a little annoyed handed me the bag and tried to take my pass from me. I then said I was still going to the after party and handed back the bag to her.

Although I understand there are a lot of people in Japan who can't speak English very well (I work as a teacher in public school here), it really annoys me when people who work in situations were they have to deal with people flat out refuse to try to speak to you because 'they can't speak English'.

But anyway, after this we were directed upstairs to were the after party was being held.
On the way out I managed to get a photo with Yasuyuki Oda. 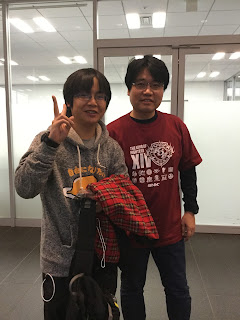 Going into the room where the party was being held they had set up several tables of food and drinks like a buffet. They had things like sushi, karaage (fried chicken), spring rolls, noodles, and some things I have no idea what they were lol. For drinks they had wine, oolong tea, and orange juice. Everything was free and you could eat/drink as much as they had to offer. 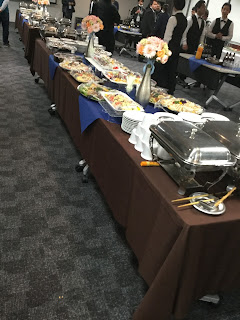 They also handed out raffle tickets that were going to be used later on for a prize draw.
As I waited around for the party to be started I spotted Professor from Madman's Cafe, who I haven't seen for a few years, and we chatted for a bit. He introduced me to one of the owners of Arcade Shock too.

Professor also spotted Kei Yamamoto (the director of XIII), so we went over to greet him and I got to take a photo with him. 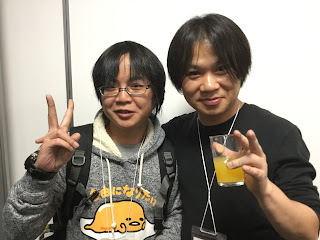 He was a really nice guy, I didn't really say anything much to him but he was a really nice guy. I only found out afterwards that he works on Metal Slug Attack, which I actually play more than KOF these days, so I was a little sad that I couldn't talk with him about it. But I got his business card so I was really happy about that.

There were a lot of people around to meet and greet but to be honest I didn't really have any idea who most people were, so I just ate, drank, occasionally went to the smoking room and played a game of KOFXIV. (They had maybe 4 set ups there.)

I did get to take a picture with Seira Ryu though. 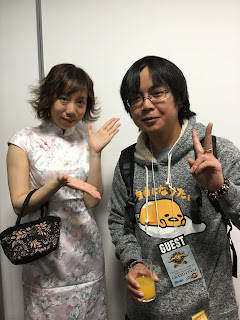 As the event was winding to a close, they started up the raffle, with Maxwell Powers and Seira Ryu being the MCs again. The prizes were 10 steel cases (no game inside) for KOFXIV, 3 KOFXIV OSTs, and the KOFXIV hori stick. Annoyingly they called out all the numbers near mine (45), and the last prize was number 44!!! Missed it by just one!!!!! (-_-)

Leaving they had a small table set up with the present bags again, I had to hand in my pass (which I would have liked to had kept) and they asked what size tshirt we'd like. 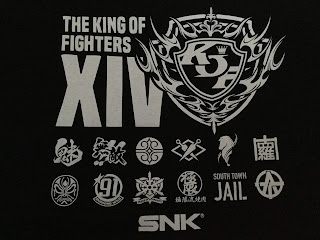 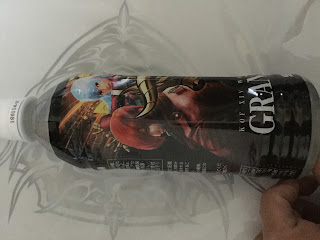 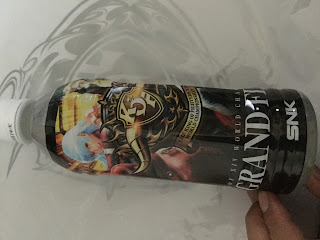 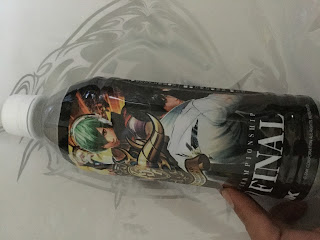 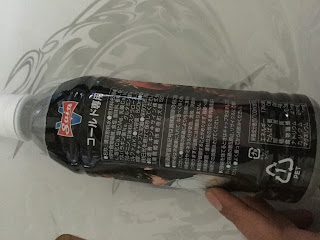 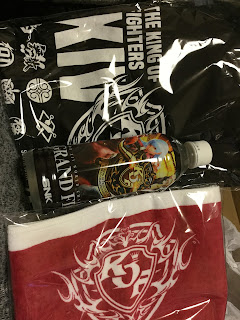 All members got a tshirt, towel and drink.

Also as we left the president(?) of SNK greeted everyone as we left, and personally shook people's hands (or at least he did to me) and thanked us for attending. Which I thought was really nice.

Overall it was a really nice event, and I enjoyed it a lot. I'm glad that I got to attend and would do so again if they held any more events in the future.

May have left some things out but as always feel free to leave a comment if you have any questions.