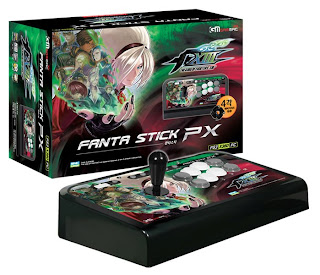 Just found out that Korean joystick makers Gammac will be producing a KOFXIII licensed stick with the lovely artwork from the US 360 version of KOFXIII.

I'm not familiar with the Fanta Stick range of sticks, here's an older version of the stick on Playasia, but i'm personally not too fond of the idea of bat top sticks.

I'd imagine with a seimitsu/sanwa stick installed, plus a clear washer so the artwork isn't blocked off by a big black circle, it could be quite a nice stick to own.

Check out the article (in Korean) on GameShot.

Also Atlus has uploaded a new trailer sampling some of the tracks from the King of Soundtracks preorder bonus.