Just found out this morning reading TinyCartridge that DBZ Extreme Butouden was unexpectedly patched with an online VS mode recently. It was already pretty cool that they patched in a training mode a while ago (even if it did feel a bit late), but to have continued support for this game is above and beyond.

I had been playing this game a lot when it first came out, and only stopped once I felt I had done everything I wanted with it but with training mode and online vs it feels like it's been given a new breathe of life.

I have only tried one match online so far (got some other things I need to take care of today first), but it seemed OK. A little lag here and there, so it's not perfect, but better than nothing I suppose.

Will try to get some videos up on my YouTube channel later hopefully of some VS matches!

Edit: Here we go, first of three videos of matches I had online, the others are currently uploading/processing but you can find them on my YoutTube channel:


Played for quite a long time against this guy, learnt quite a lot of new tricks but got pretty much destroyed by him lol. It's all good though, I think I learnt as much as I could VS cpu, so good to learn how some different assists work .

In a bit of unrelated news, I heard Donnie Yen was going to be in one of the new Star Wars movies.
Not a huge fan of Star Wars, but good to see Donnie Yen in there. Hoping he'll challenge 10 Storm Troopers to a fight ala Ip Man. 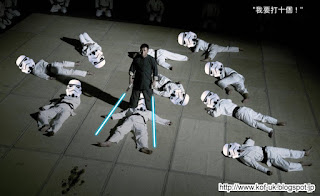