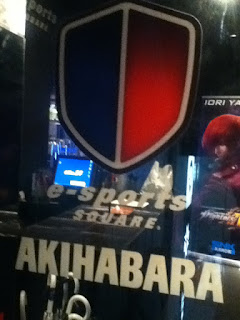 Got home about an hour ago from the KOFXIV demo event held today in Akihabara.
As you'll probably know if you follow me on Twitter, I actually made the mistake of going yesterday because I didn't read the dates/information properly, and almost didn't go today as I had a full day of work training. (I've basically been awake since 5am, and had to carry a bag full of about 8 textbooks with me!!) 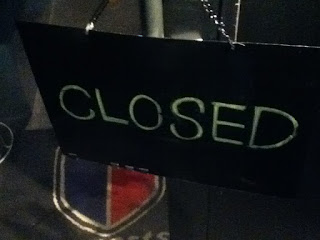 But anyway, I wasn't dead tired from training as I had a couple of Redbulls so I decided to go in the end and I'm glad I did. Aside from the KOFXIII Climax Edition arcade event a few years ago, this is the first KOF to be released while I've been in Japan so I thought why not?

I got to Akiba at about 5ish, had a quick smoke and walked as fast as I could to the event. When I got there the line looked pretty small, but I was then told by the staff that the line actually started from across the street!! Luckily the line wasn't as long as I thought but it took maybe 20-30 minutes for them to slowly get everyone into lines and slowly into the venue.

Once inside we were greeted by staff who were all wearing blue KOF t-shirts with BURN TO FIGHT written on them, and then greeted by two really cute cosplayers who were dressed as Mai and Nakoruru respectively and handing out the event goods. (Luckily I made it in time to receive the full package of towel, drink, and fan.) I was given my goodie bag by Nakoruru but I was secretly hoping to have been given it by Mai. :( 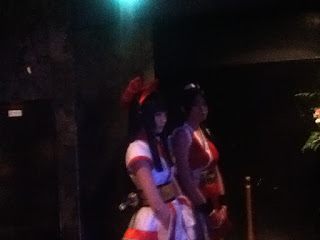 (I tried to grab a quick photo but it didn't come out very well :( )

Anyway once inside the actual gaming area we were lined up in rows of two in a winding queue as they played the latest trailer on multiple screens. 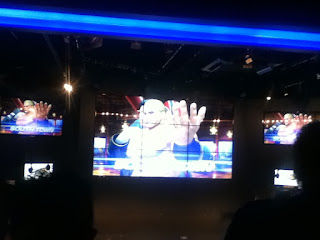 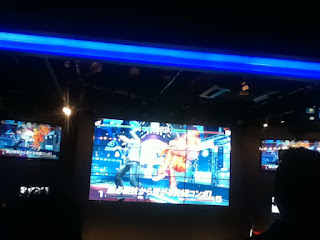 They teased quite a few of the new characters, I haven't checked Youtube yet but I'm sure they've already uploaded it or it should be up sometime soon.

My back was really hurting from carrying my bag but I was just trying to focus on who I wanted to pick and concentrating on watching the stream on the TVs.

There was a French guy standing in front of me and just it was getting up to his turn to play he asked me if I wanted to switch places with him so that he could play with his friend who he came with, as I was alone and didn't really care who I played against I agreed and we switched places.

Just as it got to my turn to play the players on stream had just finished so I got ready to sit down on the machine that was being streamed!! If you were watching it live or check the live recording you can see me playing from about 59:50.

Anyway on to my impressions of the actual game.
(Please bare in mind it's been a really long time since I've touched any KOF game so I'm incredibly rusty at the game and I couldn't get a really good feel for the game in just one game.)


First up I'll say that I was a huge critic of how the game looks, and I still do think that some parts of it look incredibly ugly but I felt that once I sat down and was actually playing it I didn't care so much.
The game does look a bit clunky at times, but I couldn't say that it really bothered me while playing.

I picked Mai, Clark and Athena. I had wanted to try Sylvie but I felt a lot of players were already using her so I wanted to use characters I felt more familiar with to try and compare it to past experience.

Sorry to say, but for Mai fans IMO she is no where near as good as I think she should be.
My favorite versions of Mai (in KOF games) are probably the ones from the UM series where she has her down-forward kick slide and the half-circle back fan swipe thing. In this game she had neither.
She seemed almost identical to her KOFXIII counterpart where she seemed a bit like Mai-lite or a bit budget in terms of her move list. As far as I could tell the only new thing she has is her super from Real Bout (?) where she stands in place and fire shoots up.

Clark seems a little changed from XIII also, it's been a while since I played that game but I seemed to remember he could do taps into his spinning punch into another spinning punch, but couldn't seem to get the second to connect. Also I didn't try it myself but saw someone do his EX grab and that seemed to put them into a bouncing property unlike his XIII counterpart.

As for Athena, out of the characters I tried she seemed the most like the previous game. Most of her bread and butters seem to work still and she probably felt the most familiar for me to play as.

Anyway, I'm pretty worn out and I have a few things I need to sort out before another half day of work tomorrow so I'm just gonna close up this post here. I pretty much came out of the event feeling a lot more positive towards the game than I have, and will now definitely be picking it up at launch.